Renee, Tony snd Craig are at Agile Australia and sit down with Adrian Fittolani from Envato and discuss program management and monte carlo simulations. Renee also makes an estimate that is super accurate!

I was priviliged to be an early reviewer for Ilan Goldstein’s book “Scrum Shortcuts Without Cutting Corners” and to also count him as a colleague and a friend. The Agile community in Australia is relatively small, so it is always exciting to see a book come out the community, particularly one that is part of one of the leading Agile Series by Mike Cohn. I was also honoured to be asked to provide a quote for the book. The following is my brief review and notes from the book.

The following is my quote from the front of the book:

“If Scrum and Agile were easy, everybody would be doing it! Now that so many are, this book is the virtual Agile coach I wish I had when I was on the early steps of my Scrum journey. Ilan is a world-class coach, and he has packed this book full of ideas and approaches to all of the common questions and issues that are bound to come up as you transform your world of work to Scrum.”

The book is broken into 10 chapters, each with 3 shortcuts each. It is written in a very easy to read and laid back style and feels like you are having a conversation with Ilan. It’s organisation means you can read the book from cover to cover of ad-hoc as a reference. It is clearly written with the Scrum Master / Iteration Manager as the primary audience, although it is suitable for anyone on the Agile team.

The key concept I really liked in the book was the notion of a Chief Scrum Master. As organisations begin to scale, it is a necessary role that is not always taken seriously. The book also covers the notion of One Scrum Master = One Team and deals with the ramifications and alternatives to this setup in a reasonable amount of pragmatic detail.

There were a couple of areas I disagreed with, mainly from an hybrid Agile approach as opposed to Scrum

Overall, this is a book that belongs on any Agile pratitioners bookshelf as a trusted advisor or useful reference. As you become more experienced, this is the book you will definitely hand-on and recommend to your more novice colleagues as they take on the Scrum Master role.

My full book review and interview with Ilan and Colin is available on InfoQ.

Here are my key notes from the book:

Shortcut 1: Scrum On The Pitch

Shortcut 11: Developing the Definition of Done

Shortcut 17: We Still Love The Testers!

Shortcut 21: Taming the Task Board

Shortcut 22: To-Dos for your Sprint Reviews

Shortcut 26: Our Lords and Masters

Shortcut 27: Morphing Managers in the Matrix

Shortcut 29: Eyes on the Prize

Shortcut 30: Shortcut to the Final Level

Agile Australia 2013 was recently held in Sydney with over 850 attendees and 3 days. Between running a pre-conference workshop, recording interviews for InfoQ, presenting a session and being a MC for a number of sessions, it was a fairly busy time but I did get to sit in on a couple of sessions. 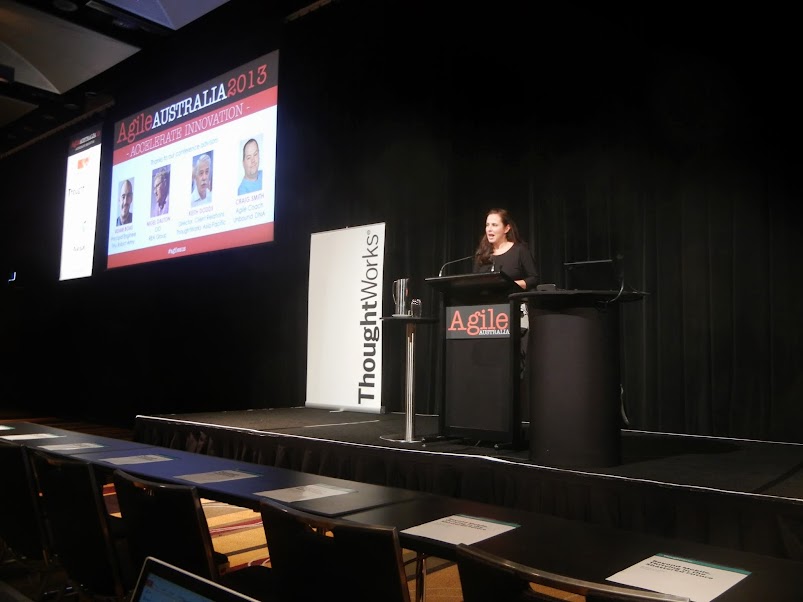 I was once again one of the conference advisors, although this year we introduced the role of Stream Chairs and Reviewers who took the bulk of the review of the 240 plus submissions and, I think, went some way to making the whole selection process more transparent and community driven.

There were a number of pre-conference workshops running on the day before the conference, and on behalf of Software Education I ran an Introduction to Agile workshop for a small but engaged group of people new to Agile. According to the course overview:

This course provides an independent one-day introduction and overview of Agile Software Development. We look at the underlying philosophy and motivation for this trend in software development and examine the core values, principles, practices and techniques that fall under the broad “Agile” umbrella. Independent of any single brand, this course looks at the key factors that are needed to apply Agile effectively and provides an experiential introduction to working this way.

InfoQ was a media sponsor for Agile Australia this year, and being the Australian based Agile Editor for InfoQ, I undertook the organisation iof the recording of sessions and interviews. I recorded a number of interviews throughout day 1 of the conference and I look forward to seeing them available on InfoQ in the coming months.

Visual Management: Leading With What You Can See

The session I presented with Renee Troughton had a great turnout and plenty of questions afterwards.  The slides are available in a separate post.

In relation to the sessions that I attended, here are my notes. 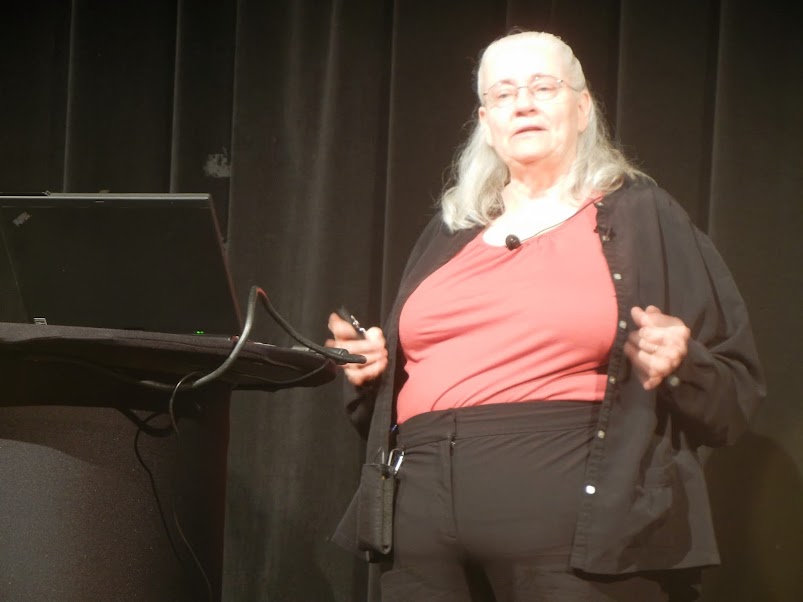 I was quite looking forward to seeing Dave Snowden and hoping his talk would cement in my mind the Cynefin Framework. His slides are available here. 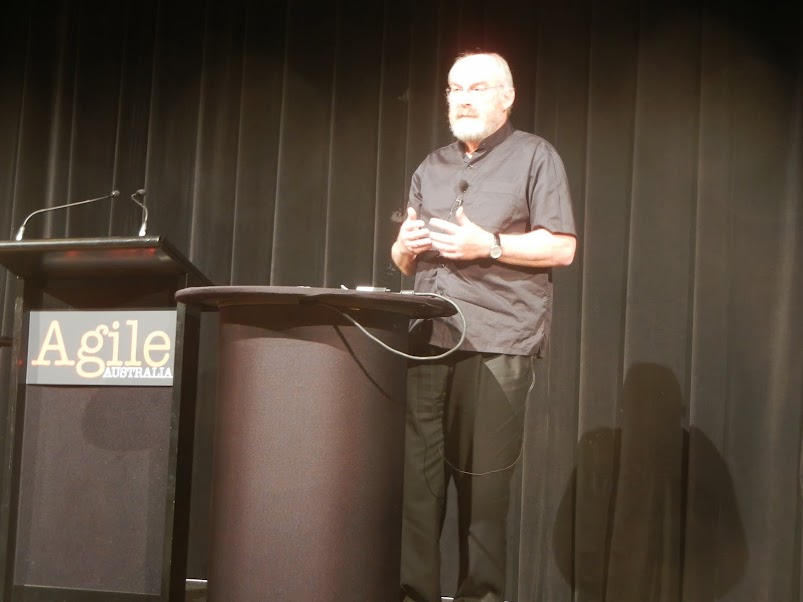 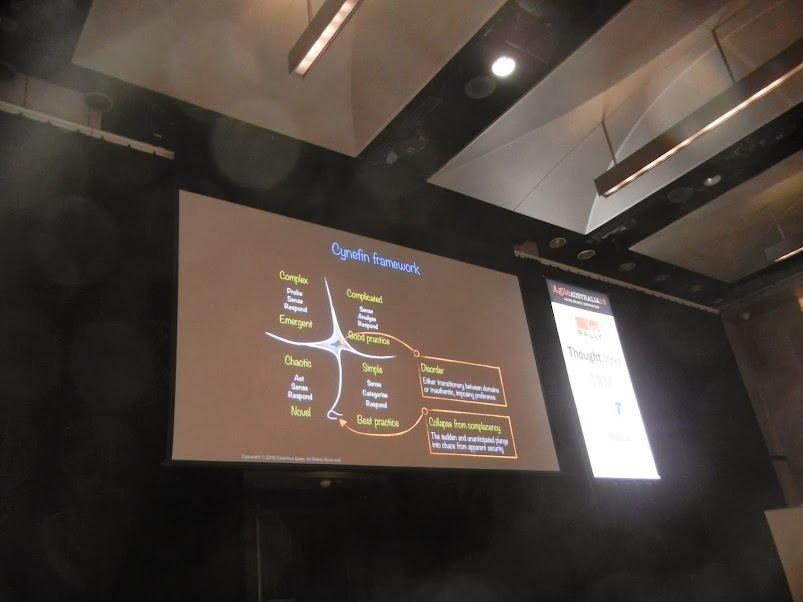 The highlight of the conference for me was to meet and hear from Bjarte Bogsnes, as I have long been a fan of his Beyond Budgeting work. His slides are available here. 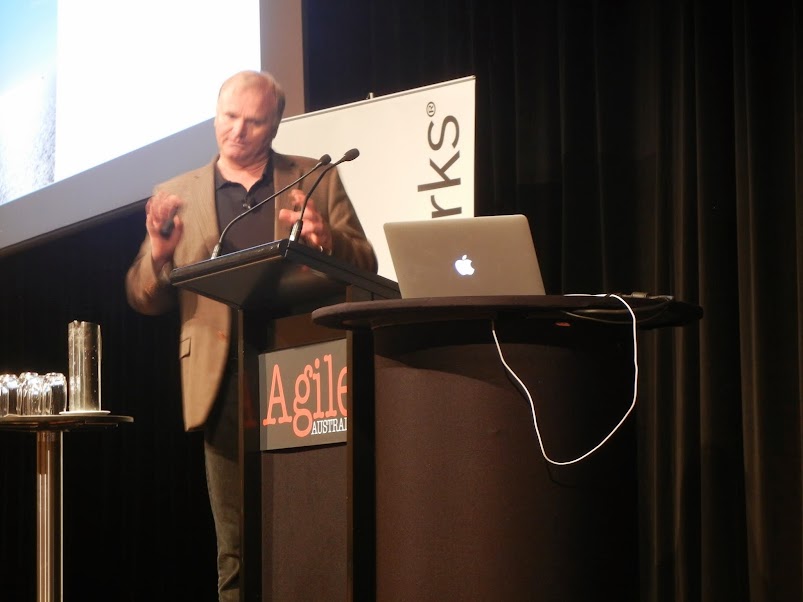 Neil Killick has become the voice of the #noestimates discussion in Australia (whether he likes it or not). His slides are available here. 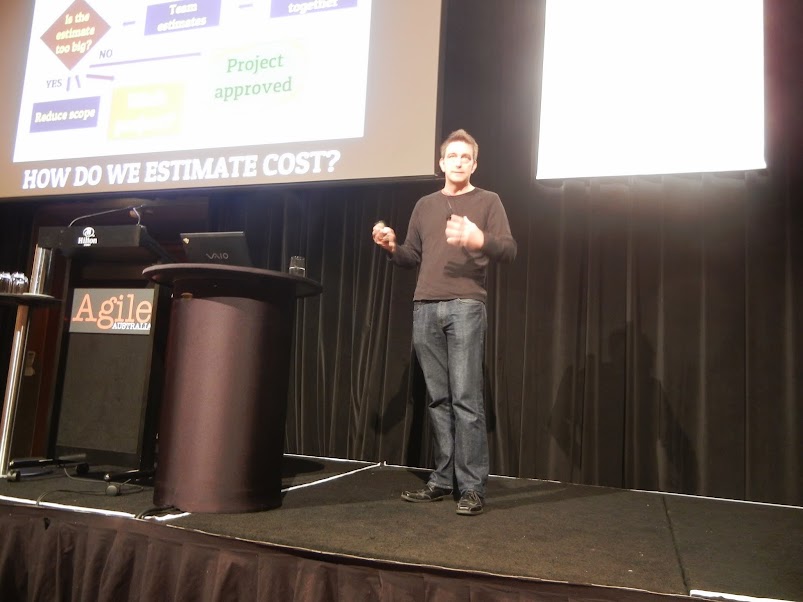 In Conversation with Patrick Eltridge

I was the MC for this session that was a coffee table conversation between Beverley Head and Patrick Eltridge, the CIO of Telstra. When I introduced this session, I made the comment that it was interesting to see how Telstra was progressing on their Agile journey and Patrick was at the conference for his third year now; in the first year we didn’t really believe they would be able to make an Agile transformation and in the second year we weren’t sure how much was fact and fiction. In 2013, they are certainly making their presence felt with over 70 people at the conference, a title sponsorship and a number of sessions being presented.

I did not get to hear all of the session, but hear are some snippets I picked up