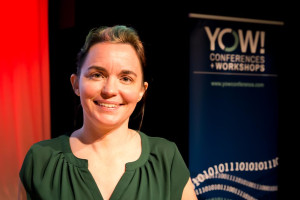 Tony and Craig are at YOW! Conference in Brisbane and chat to Jessica Kerr, software developer, consultant and symmathecist (look it up or listen to the podcast) and apart from our first live podcast sneeze they talk about: 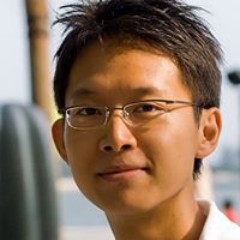 Geoff Wilson and Amanda Stockwell from 352 Inc talk about the advantages of Agile in a digital agency, approaches to user experience and the redevelopment of planningpoker.com.

Day 2 of Agile Australia 2012, and another busy day of MC’ing and attending sessions.

The first (hastily rescheduled) keynote session was from Roy Singham from ThoughtWorks.

The second keynote was supposed to be Mark “Bomber” Thompson from the Essendon Football Club but he was an unexplained no show. After an impromptu thankyou speech from me and breaking the conference for an early break, James Hird arrived to substitute and did an impromptu talk. As a result of the scheduling changes, I unfortunately did not get to see much of either session.

How Lonely Planet Used Agile With SAP and Delighted Customers

I sat in the back of this session delivered by Ed Cortis from Lonely Planet. His slides are available here.

The Trouble With Time Machine

I was MC for this session delivered by Matthew Hodgson from Zen Ex Machina. He gets extra marks for working Doctor Who and bow tie references into the talk. His slides are available here.

I was MC for this session for Kristan Vingrys from ThoughtWorks. I have known Kristan for a number of years, and I resonate very closely with his views on testing and testers. His slides are available here.

Design Eye For A Dev Guy

I was MC for this session delivered by Julian Boot from Majitek. This was one of the highlight sessions that I attended at the conference and as I remarked when thanking Julian, it reaffirmed how much I don’t know about good design. His slides are available here.

I was MC for this session led by Kelly Waters from ThoughtWorks and author of the All About Agile blog. I unfortunately did not get to see much of this presentation, the slides for which are available here.

I was MC for this session delivered by Tony Young from Integrated Research. This session was designated as “Expert” but there is nothing in this that I could see that made it that level. His slides are available here.

One of my colleagues who presented a talk on day 2 was Colin McCririck (who is the Executive Manager of a team I coached for some time) and he spoke on Leadership Secrets for Agile Adoption).

Rosie X recorded an interview with me during the conference which was a lot of fun.

Renee Troughton and I took some time out from talks to record a podcast interview with Ilan Goldstein for the Agile Revolution.

Renee also recorded a podcast with Kim Ballestrin on Cynefin.

We also recorded a wrapup podcast.

I also did some short interviews for InfoQ, which resulted in a wrap-up story.

As a precursor to the Agile Australia 2012 conference to be held in Melbourne, a product afternoon was held at the Hilton on the Park in Melbourne in November and had a good variety of Australian speakers. The success of the event means a similar event is being schedule for Sydney in February 2012. Here are my notes from the event:

Look What Happened When We Let Customers into the Product Development Loop at Lonely Planet!

Nigel Dalton from Luna Tractor led this session, his slides are available here.

Marketing is from Venus, IT is from Mars – and the Customer Doesn’t Care

Daniel Oertli from REA Group led this discussion that he hastily renamed to “5 Kick Ass Principles for Customer-led Development”, his slides are available here.

Doug Blue from SEEK presented this session, his slides are available here.

A Start-up Approach to Product Delivery in a Corporate Environment

John Sullivan from Jetstar delivered this session, his slides are available here.

Panel: Why is Customer-led Product Development so Hard?

Keith Dodds from ThoughtWorks led this panel with all of the above speakers. Some of the key learnings were:

Agile Australia 2011 was held for its third year last week at the Hilton in Sydney. Once again I was honoured to be offered an opportunity to present, be an MC for speaker sessions on both days, moderate a panel discussion and run the end of conference retrospective. The conference attracted 675 attendees and the buzz over the two days indicated to me that the conference was a huge success.

For the second year, it was a great pleasure to be one of the conference advisors. As the conference was brought forward to June, there was only six months to prepare between conferences and lots of suggestions and improvements to implement from previous years. A lot of review, debate and discussion went into putting the program together and ensuing there was a good mix of speakers, variety of topics and sessions for different levels of expertise. More effort was also put into shepherding speakers. A huge thank you needs to go to Rachel Slattery and Zhien-U Teoh from Slattery IT for their commitment to the conference as well as my fellow conference advisors Phil Abernathy, Adam Boas, Keith Dodds, Martin Kearns, Dave Thomas and Nigel Dalton.

The following are my notes from the sessions I attended on the first day.

Keynote: On Beyond Agile – The New Face of Software Engineering

Alistair Cockburn delivered this keynote, the slides are available here.

Keynote – Is Business Ready for Agile

Rob Thomsett delivered this keynote, his slides are available here. He advised that he was going to run his talk in two sprints and check the heart beat halfway

Panel – The Changing Role of the CIO

I had the privilege to introduce Neal Ford for this presentation, and his slides are available here. As I had seen many parts of this presentation previously, I did not take many notes as they can be found across other posts on this blog.

Key Metrics for an Agile Organisation

It was my pleasure to introduce Craig Langenfeld from Rally Software to deliver this presentation (originally scheduled to be presented by Mark Ortega). The slides are available here.

Simon Bristow delivered this presentation, his slides are available here.

Soldering Irons, Consumer Devices and Hardware Manufacturing in the world of Agile Software

Dean Netherton and Neil Brydon for DiUS delivered this talk which was one of the highlights of the conference for me. The slides are available here.

Putting It All Together – Agile Transformation and Development Tooling

Philip Chan from IBM delivered this presentation, his slides are available here. I failed to see a lot of agile in this talk personally.

Evan Bottcher, Neal Ford and Martin Fowler from ThoughtWorks were on this panel.

At the end of a very long day, it was good to network with attendees at the ThoughtWorks open office.

Also, I have to send congratulations to my colleague Adrian Smith from Ennova on his talk Agile for Startups which I hear was very well received (I have attended previous incarnations of this talk).

The last main day of talks at Agile 2009, and once again lost the morning to preparation and presenting a talk with Paul King.

Here is an overview of the sessions I got to:

The session I presented with Paul King, we got close to a full house and the session feedback forms were overwhelmingly positive. The slides are available in a separate post.

A full house to this session run by Tsutomu Yasui gives some validation to the fact that Kanban is gaining traction with the agile community. All the details and materials for the game are available at http://www.yattom.jp/trac/public/wiki/ProjectGames/TheKanbanGameEn. I only sat in on the first half of the session so I could fit in some other last minute talks.

I had an aim to get to at least one talk by Jeff Patton (especially for bragging rights for one of my work colleagues, Teale Shapcott)! I actually got to have a brief conversation with Jeff later in the evening which was awesome.

The emerging best practices are:

Finally, most usability designers won’t go back after doing agile!

Agile By The Numbers: What People Are Really Doing In Practice

I was keen to go and see Scott Amber speak, you can view the session or view the data. According to Scott, this is what people are doing in practice and this talk is exploring some myths.

Pretty much all development in agile?

Agile is just for small teams?

Does not apply to regulatory situations?

Agile and CMMI don’t work together?

Becoming a Certified Scrum Master is a good idea (2 days)?

Most agile teams are co-located?

Rights and responsibilites are part of agile culture?

Jeff Frederick ran his Scrum Is Evil session that I had first seen at CITCON in Brisbane earlier in the year. It was interesting to see that the outcomes were exactly the same half way around the world!

It’s very hard to take notes in a banquet with the lights dimmed, but Jared M. Spool gave a very entertaining keynote on User Interface Engineering, including some iPod vs Zune bashing and an old Apple video on future design.

Here is another post I found from this session: http://www.agilitrix.com/2009/09/user-interface-engineering-agile-2009-banquet/

The night was finished off with a Chicago Blues band and some conversation late into the night at the hotel bar!