Last week, the Agile Academy had a games night for its November 2011 meetup, to cap off the year, hosted by Adrian Smith from Ennova.

The three games we played were the XP Game, Lean Paper Plane Game and Kanban Soduko. We ended the night with the Marshmallow Challenge.

You can also view the pictures from the night.

Last month, Dave Thomas came to Brisbane for YOW! Nights to deliver his always insightful and entertaining presentation entitled “Mature Legacy Seeking Sexy New Technology for Fun and Profit: Extracting Gold from Legacy Code”. It’s been a pleasure to work with Dave on the last couple of Agile Australia conferences and I always try to make sure I catch his presentations when he is in town. 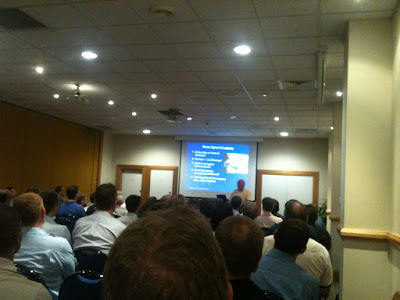 The following are my notes from the session:

A few weeks ago, the Agile Academy held its February 2011 meetup, with three speakers and a panel discussion on agile adoption in different organisations. There was a good turnout to hear the 3 speakers:

Here are my notes from the short sessions.

Ennova is a startup in the engineering space:

Nigel relayed his experiences from setting up Agile at a large software organisation:

The panel discussions covered some awesome questions from the audience. As I was lucky enough to be asked to moderate the panel, I did not get the opportunity to record any notes from this session. 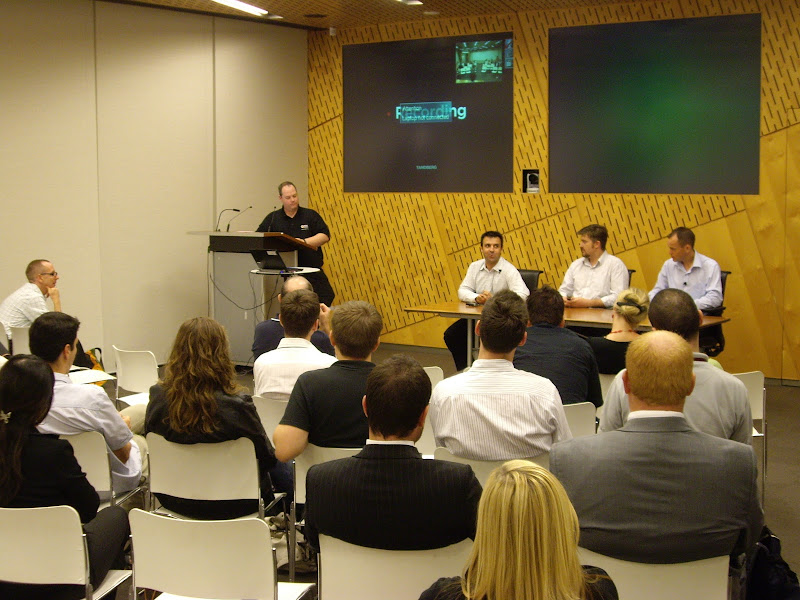 I got along to the “Googleplex” when I was in Sydney the other week, and with Steve Dalton checked out the inaugural Go Meetup. I have spent very little time looking at Go, so was interested to get some background into what it is all about.

Andrew Gerrand gave (part) of a talk on Practical Go Programming (I say part because it turned out to be a discussion with the slides rather than the talk). The slides are available here, but the talk is available as a recording from OSDC 2010.

Steve Dalton also interviewed Andrew Gerrand on the Coding By Numbers podcast earlier in the day, which is well worth a listen.

It’s that time of year where you start to clear the decks for the next year, and, in amongst a bunch of files on my hard disk, I found my notes from the Agile Academy Meetup from April 2010 in Brisbane, which I thought had been long lost to binary heaven.

At this meetup, Phil Abernathy presented an introductory agile session entitled “A is for Agile, the start of something good!” He had some good some refreshing points, and some of my notes from the session are here:

Phil then answered some questions from the audience:

Shane Hastie presented at the September 2010 Agile Academy Meetup in Brisbane on the topic of user stories. Here are my notes:

A couple of weeks ago I had the opportunity to present at the ANZTB SIGIST Brisbane September meeting with my colleague Rene Maslen. Our talk was “Agile Testing and How We Need To Change” and the slides are available on Slideshare.

Some of my other colleagues also presented on the night including Ben Sullivan and Brent Acworth who spoke on BDD and some work they are doing on an open source framework for JBehave and Craig Aspinall who spoke on Automated Black Blob Testing.

Alister Scott had some nice words to say on my presentation on his blog and was also nice enough to take some pictures, which I have embedded below:

Earlier this year, on a long flight from Brisbane to San Francisco, I had the good fortune to sit next to Charles Follett, a process analyst with the Stratam Group . I had noticed the book he was reading on management thinking, and that led to a lengthy discussion on coaching and the similarities between the agile methodology and business process re-engineering. After that discussion I had a made a note to learn more about this, especially given some of the tasks I undertake as an agile coach involve process change (either directly with the team or the project they are undertaking).

Last week I had the good fortune to get invited to see Alec Sharp present in Brisbane on business processes, thanks to my friends at Software Education. They had mentioned that he has been the highest rated speaker at previous Software Education conferences, and after seeing his presentation style I can see why. The following are my notes from this course, however if you have any interest in business processes, I highly recommend getting along to one of his classes.

1. Clarity on what a business process really is

6. Take a holistic view to understand all requirements

7. Why would they choose your process – differentiator

Adrian Smith presented at the July 2010 Agile Academy Meetup in Brisbane on the topic of Agile for Startups. Here are my notes:

Some of the tools that support agile startups:

The inaugural Agile Alliance Meetup in Brisbane kicked off on May 13 at the Hilton, Brisbane with a talk by Kristan Vingrys (Global Test Lead for ThoughtWorks) talking about the changing role of a tester. I have had the good fortune to work with Kristan a couple of times this year, so was looking forward to catching up again as well as seeing this talk.

Among other announcements, Robin Mack is the Brisbane liason for Agile Alliance Australia and they are currently looking for volunteers, sponsors and speakers.

The following are my notes from the session, the slides are also available online:

Then there were some questions from the crowd: