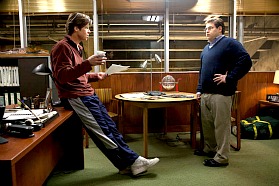 So there have been a lot of posts out there about Moneyball and how it directly relates to Agile and the Lean Startup. However, I finally got around to watching the move tonight (thanks to my colleague Renee Troughton for lending me the Blu Ray) and had to note down my own thoughts. There are so many good quotes and scenes from the movie, but here are just a couple of standouts (warning, some folks may consider these to be spoilers if you have not seen the movie!)

Right at the start of the movie Billy Beane is talking to the team owner about needing more money (sounds like the start of any typical traditional project to me!)

Billy: I can’t compete against a hundred and twenty million payroll with thirty eight million dollars.
Schott: We’re not gonna compete with these teams that have big budgets. We’re gonna work with the constraints that we have and you’re gonna get out and do the best job that you can recruiting new players. We’re not gonna pay seventeen million dollars a year to players.

And a little later in the scene, Billy sets his goal.

Billy: That’s my bar. My bar is here. My bar is to take this team to the championship.

At the scout’s meeting, their discussion is all about appearances rather than understanding and building a team.

In that same meeting, I really enjoyed the scene where Billy is in the position of a coach/facilitator and keeps asking them if they understand the problem!

Grady: We’re trying to solve a problem here.
Billy: Not like this you’re not. You’re not even looking at the problem.
Grady: We’re very aware of the problem.
Billy: Okay, good. What’s the problem?
Grady:  Okay, Billy. We all understand what the problem is. We have to replace…
Billy: Good. What’s the problem?
Grady: The problem is we have to replace three key players.
Billy: No. What’s the problem?
Poloni: Same as it’s ever been. We’ve gotta replace these guys with what we have existing.
Billy: No! What’s the problem, Barry?
Barry: We need three eight home runs, a hundred twenty R.B.I’s and forty seven…
Billy: Aaahhh! The problem we’re trying to solve is that there are rich teams and there are poor teams, then there’s fifty feet of crap, and then there’s us. It’s an unfair game. And now we’re being gutted, organ donors for the rich. Boston has taken our kidney’s, Yankees takin’ our heart and you guys are sittin’ around talkin’ the same old good body nonsense, like we’re selling deeds, like we’re looking for Fabio. We got to think differently!

A little later in that scene, Billy is really trying to make the committee think differently, but they are just thinking in the same old ways.

Billy: If we try to play like the Yankees in here, we will lose to the Yankees out there
Grady: Boy, that sounds like fortune cookie wisdom to me, Billy.
Billy: No, that’s just logic.

I really liked the scene where Billy is talking with Art about his contract. The final line of the conversation reminded me of many wasted meetings.

Billy: Good meeting. Everytime we talk, I’m reinvigorated by my love of the game.

And then there are always the nay-sayers and (in the case of Grady) those who will always try to bring your approach down.

Announcer: Do you see this as a decimation of the whole team?
Grady: I think that he bought a ticket on the Titanic.
Announcer: Oh, boy! He’s tried to come up with a new approach, my hat’s off to him. It won’t work.

The discussion between Billy and Peter about cutting players was a good reminder of being honest and transparent.

Billy: They’re professional ball players. Just be straight with them. No fluff, just facts. ‘Pete, I gotta let you go. Jack’s office will handle the details.’
Peter: That’s it?
Billy: Would you rather get a bullet to the head, or fire to the chest or bleed to death?
Peter: Are those my only two options?

There was an interesting little scene regarding soda, that is a good reminder that sometimes you can be penny smart but pound foolish (the little things are sometimes what keeps individuals and teams motivated).

Justice: And how come soda is a dollar in the club house? Cause I’ve never seen it like that.
Peter: Billy likes to keep the money on the field.
Justice: Soda money? Really? Where on the field is the dollar I’m paying for soda?

The scene where Billy shakes up the team by firing some of his all-stars was the turning point that shows that sometimes your superstars are hiding the real talent (and sometimes you need to do something extreme to make a change). Art is the classic Project Manager in this scene.

Art: Yeah, I don’t wanna go through team rounds, Billy. The line up card is mine. And that’s all, okay?
Billy: The line up card is definitely yours, I’m just saying you can’t start Pena first.
Art: Well, I am starting him at first.
Billy: I don’t think so, he plays for Detroit now.

There are some good inspirational pieces in the film (like when Billy asks Justice to step up and be a leader for the younger guys). This quote is my favourite though.

Billy: Everybody, listen up! You may not look like a winning team, but you are one. So, play like one tonight.

The big speech when Billy is at the Red Sox resonates with anybody who has tried to implement Agile in a team before.

For forty one million, you built a playoff team. You lost Damon, Giambi, Isringhausen, Pena and you won more games without them than you did with them. You won the exact same number of games that the Yankee’s won, but the Yankee’s spent 1.4 million per win and you paid 260 thousand. I know you’ve taken it in the teeth out there, but the first guy through the wall. It always gets bloody, always. It’s the threat and not just the way of doing business, but in their minds it’s threatening the game. But really what it’s threatening is their livelihoods, it’s threatening their jobs, it’s threatening the way that they do things. And every time that happens, whether it’s the government or a way of doing business or whatever it is, the people are holding the reins, have their hands on the switch. They will bet you’re crazy. I mean, anybody who’s not building a team right and rebuilding it using your model, they’re dinosaurs. They’ll be sittin’ on their ass on the sofa in October, watching the Boston Red Sox win the world series.

Near the end, when Peter shows Billy the video about the guy hitting the home run, they starting mentioning metaphors (I was so thinking about the metaphor in XP at that point!)

Also, the Lenka song “The Show” made me think about why as Agile coaches we get up in the morning and do this (plus good to see Australian music in the movie!)


For those who haven’t seen the movie, it is well worth the time spent. I hadn’t realised Aaron Sorkin had worked on the screenplay, so for that alone it had to be good!