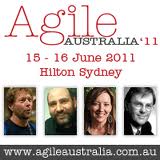 Ahead of the Agile Australia 2011 conference this year in Sydney, I was lucky enough to both present and sit in on the pre-conference workshops.

On behalf of the Agile Academy, Tony Ponton and I presented First Steps in Agile to a small but enthusiastic class. The course covers introductory material around the values, principles, practices and agile approach.

I had the pleasure of sitting in the back for Alistair Cockburn‘s workshop, with Tony Ponton and Martin Kearns. Whilst I had seen some of this content in Alistair’s Agile 2009 keynote, Tony and Martin had been lucky enough to sit in Alistair’s 3 day class earlier in the year.

Alistair does not use slides but rather a one page laminated handout. My comment to Alistair at the end of the workshop was “Second time hearing it, learnt twice as much”, so here are my notes from this time around.